Enchantment of the senses

Nestled in the most genuine natural frame of Capri, after a pleasant walk uphill towards Mount Tiberio, Villa Lysis opens up to the visitor’s eyes as one of the best hidden jewels of the island.
There is something magical about Villa Lysis. It was built in 1904 by will of Jacques d’Adelswärd Fersen, a nobleman from Paris who chose the island as his voluntary exile destination, after his life had been shattered by a number of scandals that led him to leave his native country and to create what we would call a lifelong link with his new home place.
Elegant, eccentric, luxurious, secluded, monumental, the Villa was, above all, an intimate shelter where Fersen enjoyed his carefree flirts with Nino Cesarini, a young man from Rome, until the latter’s premature death.
Over time, Villa Lysis turned into a meeting place for artists, intellectuals, poets and writers, who stayed in Capri at the beginning of last century and skillfully described and praised its myth.

Visiting Villa Lysis means discovering its secrets and wonders. Entrance halls, stuccos, decorations, furnishing, precious marbles, you won’t find one single detail lacking peculiar inspirations: from Louis XVI-style to Neoclassical theatricality, from the grandeur of ancient Greece to the sinuous forms of art nouveau, from the gilding of Vienna Secession to the contaminations of Oriental art.
The result is an extraordinary Villa on a spur overlooking the sea with breathtaking views of Marina Grande and the Gulf of Naples.
The symbol of Villa Lysis is its majestic staircase culminating in the peristyle with Ionic columns, where the inscription “Amori et Dolori Sacrum”, commissioned by Fersen himself, embodies the real essence of his life. 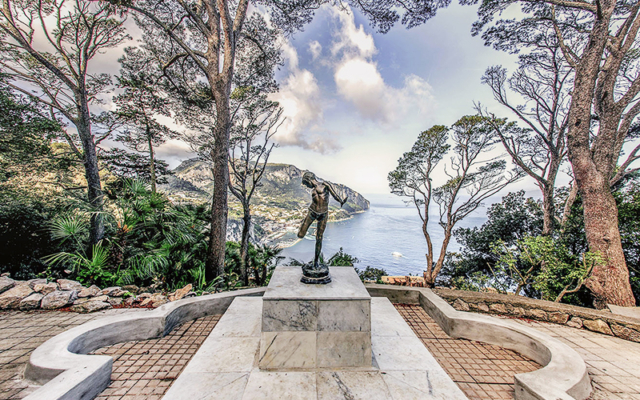 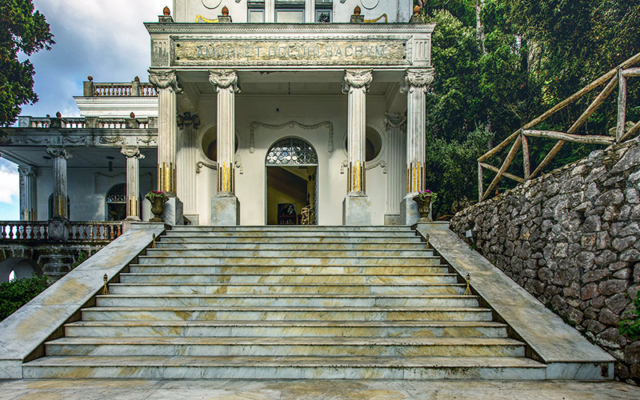 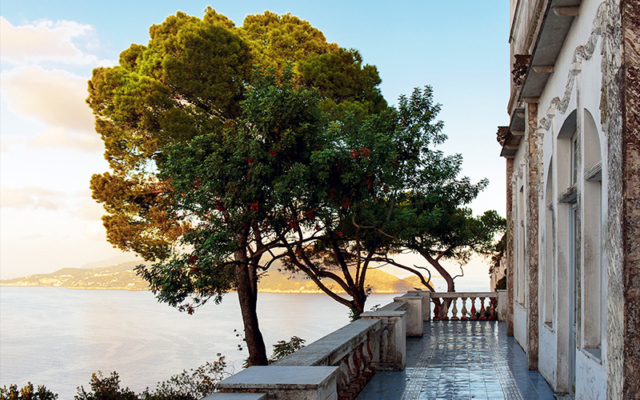 History of the Villa

The project of the Villa, whose first name was La Gloriette, later renamed Lysis (a word deriving from Liside, a young disciple of Socrates or from “lys”, i.e. “lily” in French), was designed by Fersen’s friend, Edouard Chimot, a renowned scene-painter and engraver.

Actually, the work, begun in 1904 and completed the following year in July, was personally run by Fersen. The choice of place (Lo Capo) was not a product of chance:  the Count wanted his residence to rise up high on the rocks, just below Villa Jovis, the Mansion that Emperor Tiberius had elected for his voluntary exile in Capri long before.

Local workers, too, took part in the realization of the project. As a matter of fact, it is known that one of them was victim of a tragic accident and that it was Mimì Ruggiero, a Caprese gardener, who looked after the vast park of the Mansion.

And it is exactly from the garden that in the year 1958, French writer Roger Peyrefitte, began to describe the Villa in his novel, The Exile of Capri.

“In addition to the orchids, which Fersen had a greenhouse built for, next to the Villa, he planted narcissus, camellias, roses, hydrangeas, hibiscus and azaleas. Against gardener Ruggiero’s advice, he refused the bougainvillea, which he considered vulgar. Myrtle groves in honor of Venus were added and put side by side to the laurel groves. Fersen was in search of all the varieties of that native shrub, whose most fragrant species bore the name of Tiberius “.

The Villa, the ground floor

“A monumental staircase connected the garden to the peristyle (the inscription AMORI ET DOLORI SACRUM was found on the white marble architrave). In the atrium, a marble staircase with a wrought iron balustrade, adorned with vine leaves, led to the upper floor; the entrances to the veranda and the main hall were on the left; a library covered the opposite walls. In the middle, a copy of Verrocchio’s Davide smiled; the head of Goliath, at the young man’s feet, represented for Fersen  the ‘justice of the times’ “.

“Paved with blue tiles and white Greek frets, the veranda extended in front of the main hall which, with three large windows, opened up onto a terrace with balustrades facing the Gulf of Naples and the Vesuvius. Four Corinthian columns, fluted with gold like the ones in the peristyle, supported a domed ceiling. In one corner there was a stove “.

“One floor only, first of all there was Nino’s room, with a terrace; then Jacques’s vast room, which ended in an exedra, with three windows facing the Gulf and three more facing Mount Tiberius. Across the corridor, a guest room, called ‘the pink room’, and the dining room, served by a freight elevator “.

“In the basement were the staff rooms, a second room for guests and the area dearest to Jacques’ heart: the opium den, called the ‘Chinese room’. It was located at the end of the arches which, to the left of the peristyle, supported the veranda and the terrace of the main hall. The wide space, the low ceiling, the rock that emerged in one corner, created a strange impression. Two columns with liana motifs, surmounted by a huge architrave with symbolic figures, isolated a kind of patio, illuminated by round windows with yellow glass. Chinese inscriptions in gold letters sparkled on the walls, framed by mosaics “.

“Three pergolas raised their colonnades in the garden: one in front of the Chinese room, another in the shape of a double bass and overlooking a statue of Bacchus and the third on top, near the tennis court. The name of the villa could be read on a secondary door; the gate, decorated with stone vases representing satyr masks, bore a simple brass plaque, with the name of Fersen. […] A balustrade bridge joined the two parts of the garden and passed over the path leading to the promontory cove, where a terrace, fitted with benches, served as a lobby. On a further terrace, across the bridge, the pedestal of a faun hoisted a Latin inscription inspired by D’Annunzio: ‘Laudes vitae, Laetitia terrae’ “.

Following Fersen’s testamentary disposition, on his death occurred in 1923, the ownership of the Villa passed to Germaine, his sister; the usufruct went to Nino Cesarini, the Count’s companion.

After several steps it was purchased, in 2001, by the Municipality of Capri. 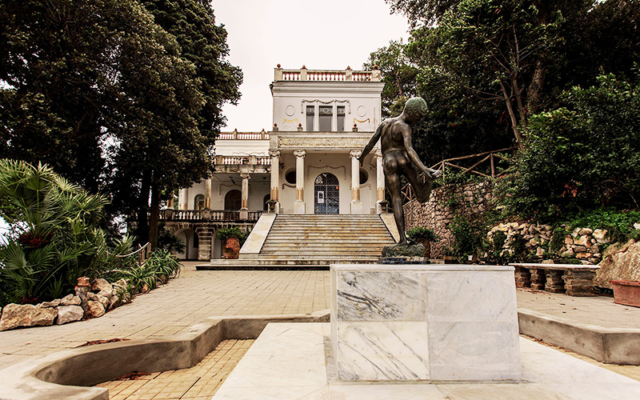 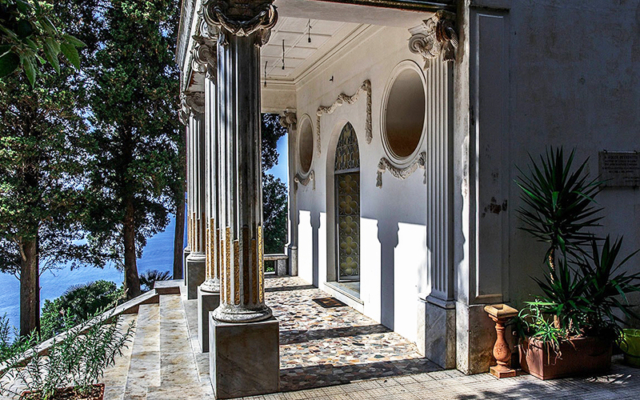 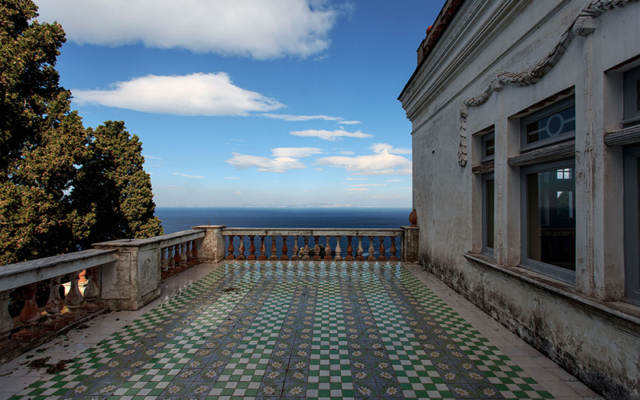 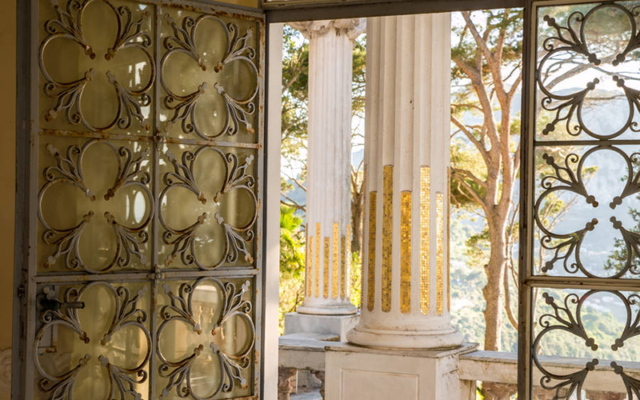 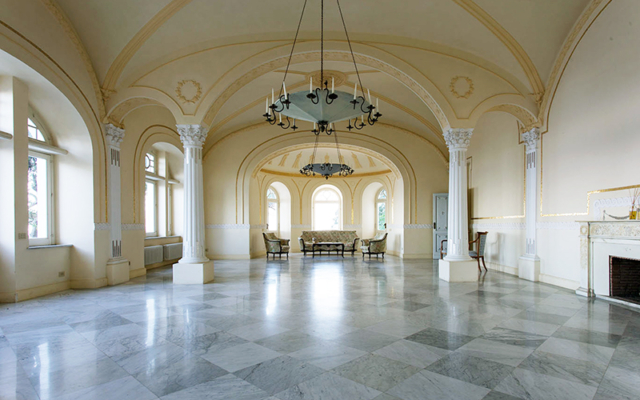 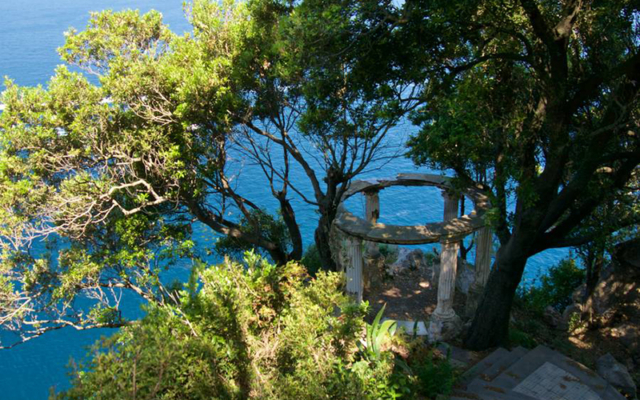 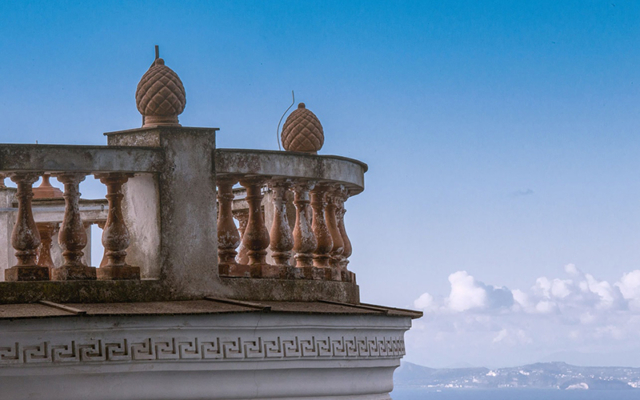 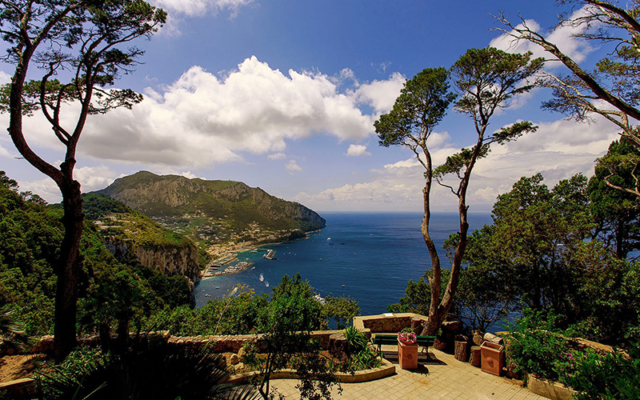 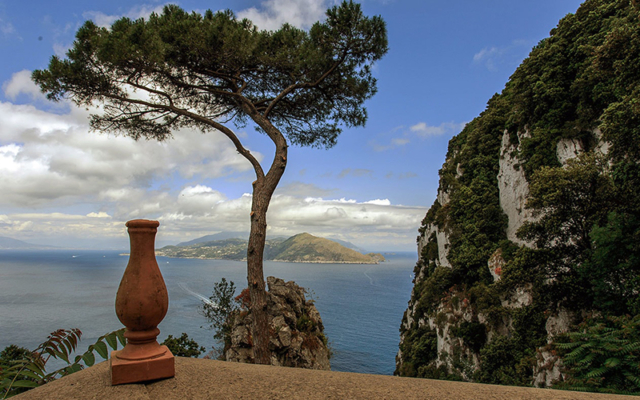 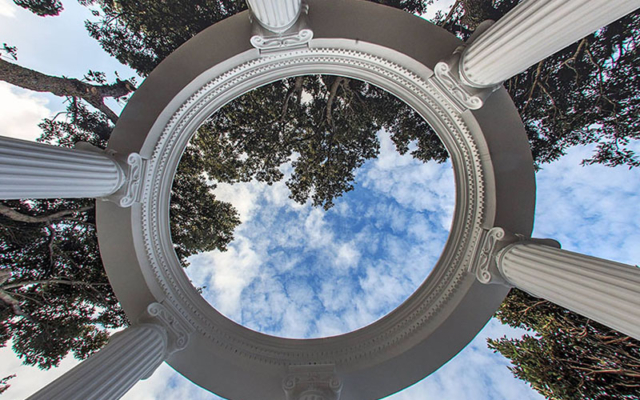 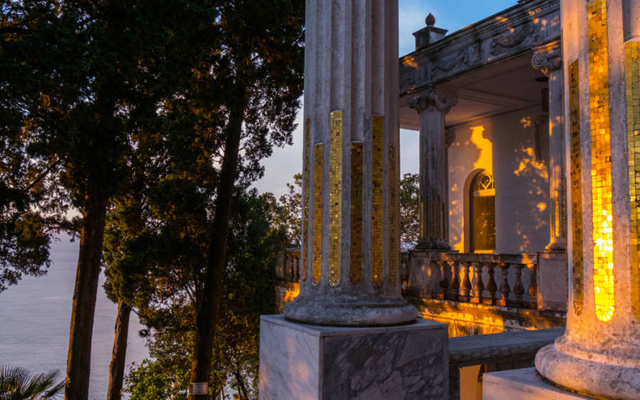 In the summer, Villa Lysis becomes the stage for concerts, exhibitions, theatrical performances, poetry readings, dance shows, but it can also host private events such as weddings, banquets and gala dinners.

For any information you can consult the Institutional Website www.cittadicapri.it or contact the Culture and Tourism Office directly at Email: culturaturismo@cittadicapri.it.

How to get to Villa

Starting from the Piazzetta you can reach the site either walking along Via Longano and Via Sopramonte or opting for Via Le Botteghe, Via Fuorlovado and Via Croce. In both cases you will get to “La Croce”.

Once there, keep going along Via Tiberio as far as the intersection with Via Lo Capo and, at the end of this last street, you will reach your destination.

It takes 45 minutes to get to the Villa and the walk is uphill, so comfortable shoes are recommended!

From April to October